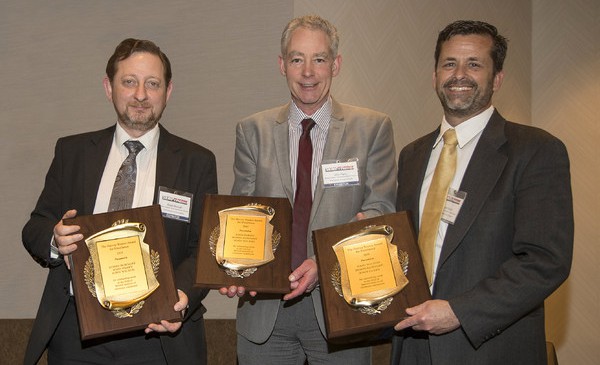 “We are extremely proud of our team for their commitment and dedication in discovering ways in which heatsinks may be optimized,” stated Roland Feldhinkel, general manager of Mentor Graphics Mechanical Analysis Division. “To be recognized by the selection committee comprised of highly esteemed thermal experts is a tremendous honor, and particularly personal since this award is named after the co-founder of Flomerics, which Mentor Graphics acquired in 2008.”

The Harvey Rosten Award For Excellence has been established by the family and friends of Harvey Rosten, who was responsible for the development of PHOENICS, the world’s first commercial general purpose computational fluid dynamics (CFD) software while working at CHAM, and co-founder of Flomerics (now a division of Mentor Graphics Corporation). The Award commemorates Rosten's achievements in the field of thermal analysis of electronics equipment, and the thermal modeling of electronics parts and packages. The award aims to encourage innovation and excellence in these fields.

Dr. Robin Bornoff is a market development manager in Mentor Graphics Mechanical Analysis Division. Robin was previously an application and support engineer, and a product marketing manager, specializing in the application of CFD to electronics cooling and the design of the built environment. He attained a mechanical engineering degree from Brunel University in 1992 followed by a PhD in 1995 for computational fluid dynamics (CFD) research.

John Wilson is currently the electronics product specialist for Mentor Graphics Mechanical Analysis Division. John previously managed the engineering design services team, where he gained extensive experience in IC package-level test and analysis correlation, heatsink optimization and compact model development. He joined Mentor Graphics is 1999 after receiving his BS and MS in mechanical engineering from the University of Colorado at Denver.

Dr. John Parry is the electronics industry manager for Mentor Graphics Mechanical Analysis Division, which he joined when it was founded as Flomerics in 1989. He attained a chemical Engineering Degree from Leeds University in 1982 and a PhD in 1988. His expertise includes compact modeling of fans, IC and LED packages, heatsinks, DoE and optimization methods, and thermal characterization, with over 75 published technical articles. John is a member of JC15 and past chair of SEMI-THERM.

To learn more about Mentor Graphics FloTHERM technology and to access articles and papers by these Harvey Rosten Award winners, go to: https://www.mentor.com/products/mechanical/flotherm/flotherm/

Mentor Graphics Corporation is a world leader in electronic hardware and software design solutions, providing products, consulting services and award-winning support for the world's most successful electronic, semiconductor and systems companies. Established in 1981, the company reported revenues in the last fiscal year of approximately $1.28 billion.